I spent the first week of quarantine working at my kitchen table.

My partner needed the downstairs desk for her work more than I did. She was spending her day living in Excel and WordPress, and I was spending my day living in — well, iTerm and VSCode, sure, but there are tasks in software development that require real estate (lots of tabs! lots of files!) and tasks that don’t, and I was working on the latter. So she got the downstairs desk.

A note on the downstairs desk: it served me very well for seven years, and was in many ways the Platonic ideal of a desk: a large and useful eyesore that found itself well-nestled in the corner of whichever room it belonged. It was an IKEA desk, just like everything else I owned in 2013: 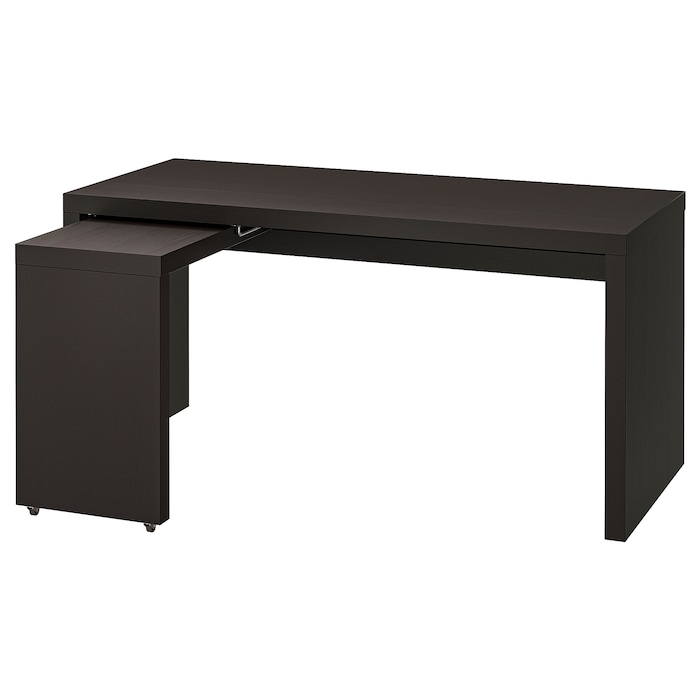 At some point over the last four years, the phrase “Ikea hack double desk” had furrowed its way into my subconscious — a kind of Pinterest shibboleth. I spent the lumbar-sighing week at the kitchen table idly searching for this phrase and came across a link that appeared to be exactly what I needed it to be:

So we took some measurements and went to Ikea, joking (as one is almost morally required to joke) about Swedish hazmat suits and hand sanitizer. We bought the materiel de piratage: three dressers, two kitchen countertops, a pair of high-backed chairs and the requisite detritus of any such pilgrimage (frozen meatballs, some lamps that might not last the season, that sort of thing.) The trip took two hours; the assembly took around three, each completed dresser punctuated with a martini.

Whenever I follow any sort of instructions, there is a climactic moment of terror as the finale draws near: did I accidentally uninstall Unix?; did I overcook the shakshuka?; does the Ikea desk, like so many DIY-projects, in fact look terrible? My partner was no doubt wondering the same thing as we gingerly placed the countertops on top of the dressers and staged the office as if for prospective coworking tenants: the lamplight orbs placed with just the right margin, the desk chairs placed at identical acute angles, the sterility of matching Magic Mice and Keyboards.

But I am happy to report this is now our favorite room in the house: I’m old enough to know my faults, if not yet old enough to fix them: I know that I have a tendency to compartmentalize, and to deal with things outside of my control by tunnel-visioning on the things I do.

So when a pandemic breaks out, I get a nice new desk and I try to be productive. I don’t mean this in a prescriptive sense: I’m not saying you should be productive because it’s the right thing to do, or it’s the best way to spend your time indoors. I’m saying that in times of rare calm I need to spend more time around allen wrenches and Django; I’m saying that in times where you find yourself enchanted and disgusted by the spiral of things, you get to do whatever you can to grant yourself a bit of sanity.

(I have learned, in recent weeks, that this also might mean exploration of remote islands under the vassaldom of Nook Inc.)

We’ve worked for two weeks on the double desks now, and it is exactly what we hoped for: the storage space is ample, the aesthetic satisfying. The basement office is, much to the chagrin of my partner, my favorite room in the house now: it feels like a place in the house where things have unquestionably improved in 2020, which I appreciate very much.

(Also, the lumbar support on the new chair is quite nice. Certainly much better than being hunched over the kitchen table.)