Disciples of the Rams

I am not a designer. There was a time where I applied that noun to myself – back when web designer was the seeming parlance, rather than web developer or front-end engineer. But even then, my ability to design stopped and ended at only knowing what not to do: not to use gradients, not to use <marquee> tags, and generally not to assault any senses of the user.

Still, I consider myself as having some design sense, and I like technology, so thus I complete the cliché by following Apple and Jonathan Ive. And thus I follow Dieter Rams. And thus I finally found myself reading As Little Design As Possible, the coffee-table monolith which idolizes Rams in words and photographs.

The book itself is a pleasure: I didn’t know that cassette players and table lighters could have flattering headshots, but they do here. I’m going to spare you the flowery prose offered by others of Braun’s products, but they are unmistakably striking. (I did not expect to come away from this book wishing to replace my alarm clock, but here we are.)

Snow White’s Coffin was the code name given to the SK4, Braun’s symbolic entry into the record player market: The reason for the name is obvious, as the SK4 shared an affinity for the transparent with its namesake: 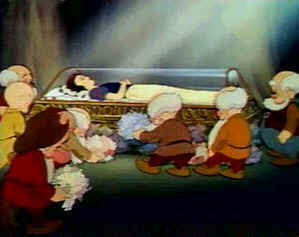 The victory is obvious in retrospect: “Hey, let’s make the lid transparent” quickly transformed from a daring design decision into keeping the status quo, and now all of the record players you see in your hipster friends’ lofts let you peer into the enclosure, let you watch the music get slung at 33rpm.

As Little Design As Possible uses Snow White’s Coffin as sort of a symbol for Rams’ excellence: it is a design choice that is simultaneously bold and humble, simple and transcendent.

I, on the other hand, can’t stop but be reminded of the series finale of 30 Rock, where Alec Baldwin has his own Dieter moment:

Clear dishwashers! You can see what’s going on inside! It’s the best idea I’ve ever had. Thank God I took that boat trip.

Which is not to trivialize the SK4, but I think analyzing design 1 lends itself easily to navel gazing. And that’s the weird thing about the attempts to examine Rams’ work with Braun or Vitsœ too deeply: his output is obviously excellent, but to put them in the spotlight is ruining the effect.

Rams created incredible forms, interfaces, and functions, but that is not where he proved his genius. Rather, Rams’ genius is evident as soon as we stop using one of his products and they instantly retreat from the stage: quiet, unobtrusive, and completely free of pollution. 2

And so, when I create things, that’s gonna be my M.O. as much as possible: above all else, the elimination of friction and background noise.

This begs the question:

Well, how the hell do I do that?

The absolutely vital part of this book, as is befitting the year in which I read it, is a glorified listicle. Most are likely familiar with Rams’ ten principles for good design, but this takes a slightly different tact: fifteen questions one should ask themselves upon designing a new product.

You can tell that these questions were asked by a dude who concerned himself mainly with consumer appliances 3, but they can be easily used for the general process of creation.

I printed a couple copies of this out and put them in my home office + work office, letting my eyes wander over them as necessary. I am not spending my time designing alarm clocks – let alone interfaces – but I am creating things that other people use. For that reason, I think it’s a worthwhile exercise.

To end on a much more succinct declaration of Braun’s vision, via Erwin Braun:

[Braun’s appliances] should be humble servants, to be seen and heard as little as possible … like a valet in the old days.

Now, if you’ll excuse me, I’m off to ruin my credit score and buy a half-dozen 620 Chair Programmes.